Detroit is a really a small town that has been under attack by the far right, like Central Falls, Rhode Island and Puerto Rico. The story in the film series is told by Detroit’s best and brightest. They are lionhearted fighters who are silenced, jailed, made invisible or openly attacked in the mainstream media if they hit a nerve of the greedy pigs who run the town an 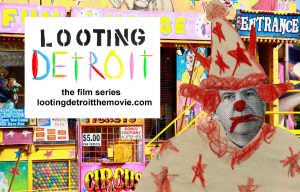 d feast on tax money. The greedy pigs run Detroit using all kinds of tricks which you will see in the film. Every night of the week you can go to a community meeting planning a protest somewhere, while buildings burn down ceaselessly without investigation and children live in relentless poverty.

Detroit has been maligned in  media. For those who have not lived in a Detroit neighborhood or had friends who were Detroiters, we ask you to erase everything you have heard from the racist media in Detroit, which then spreads nationally.

Detroit is the kind of place where a film series like this could be made on virtually no budget – just from a strong social network of activists and community folks. Outside Detroit, a place with few resources, support came from Jan BenDor to make the film and funding from National Nurses United.

We suggest you begin with the introduction, then continue the series in order. All the films are listed in the menu.

It is meaty. We started the film series with the intention of making one short film, but Detroit’s recent history has been so woefully ignored and twisted – and the interviewees were so brilliant we couldn’t condense it. It’s more Guns, Germs and Steel than it is a commercial. Detroit deserves this. The Motor City is an incredible mix of grit, strength and love. We hope that you get some truth about 600,000 people who are lied about daily in the news. If you see any of these things happening in your city, we hope you will follow the instructions in a chant that seeps out of well marched sidewalks in every part of town: “When democracy is under attack, what do we do? STAND UP AND FIGHT BACK.”

Looting Detroit: The Series was created by Jan BenDor and Jean Vortkamp. To contact Jan: jan at bendor.org To contact Jean: jeanvortkamp at yahoo.com

The right to democracy has long been denied the citizens of Detroit through a corrupt voting system. 66,235 votes were too poorly secured to be recountable including all 44,215 of the city’s absentee votes in 2009. Thousands of ballots appeared to be in the same handwriting in 2013. Real investigations into these incidents have never taken place, which explains why the Detroit does not reflect the people who live there.

Elections Part 1 explores the politics of Wayne County, the county Detroit is in, the mayoral election of 2009/recount during which 66,235 votes were thrown out as un-recountable including all 44,215 of the city’s absentee votes, and the 2013 mayoral election primary.

Elections Part 2 explores; the 2013 mayoral primary recount where thousands of write-in votes appeared to be in the same handwriting, the “investigation” and general election issues.